Want to be part of the theatre fun - but not onstage? It takes more than actors to put on a show!

Iron Mountain is looking for help with backstage and production work - as well as new members!

If you are interested in volunteering, please email irnmtnstage@gmail.com or call 973-962-9007. 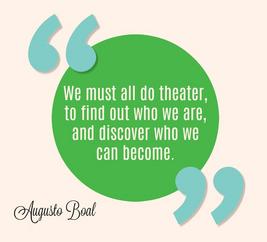 Join Iron Mountain Stage Company as they take on a fun new venture - an outdoor performance aimed at young audiences. We'll brave the elements together, and be brave if we're called up to be part of the show! Spend an hour with the family - outside and screen-free. Performances will be held in the covered pavilion.

​Synopsis: Furry Tails With a Twist is show filled with charm and energetic humor. Creative storytelling drives the action and the audience partners in the tales. Follow the adventures of the bumbling troupe of actors trying desperately to present a few of the world's most beloved fairy tales. Unfortunately, their script becomes seriously scrambled and they perform "Goldisocks and the Three Wolves," "The Three Billy Trolls Gruff," and "The Three Little Bears," who end up battling the Big Bad Billy Goat to delay the decimation of their domiciles. In addition to entertaining with humor, slapstick and charm, the actors also guide the audience through the creative world of story structure, writing vocabulary and theatrical staging. It takes the whole audience to set the stories straight! In the end, both the actors and the audience have learned creative tale telling through these furry tails … er … fairy tales.

$5 for all. Reservations are suggested; tickets may also be purchased at the door.

​Prior Iron Mountain Productions at The New Weis Center

Synopsis: Three thrilling tales of suspense! Spies, murder, love, and other trademarks of Alfred Hitchcock come to life in the style of a 1940s radio broadcast of the master of suspense's earlier films. With The Lodger, Sabotage and The 39 Steps, Vintage Hitchcock: A Live Radio Play is a triple feature, complete with vintage commercials, that recreates a daring train chase, a serial killer's ominous presence, and a devastating explosion through the magic of live sound effects and musical underscoring.

​
Summer 2021 - "Hat Tricks"
Written by: Dori Appel; Directed by: John Santalla
Synopsis:​ Iron Mountain Stage Company celebrates its return to live theater with its production of Dori Appel's "Hat Tricks". An exciting compilation of vignettes, the play covers a range of women's experiences in the second half of life, ranging from the purely comedic to those that combine humor with thoughtful and sometimes poignant explorations. This is a richly varied collection featuring a single intriguing commonality: Every scene or monologue includes the presence and compelling use of a HAT!

Synopsis: A group of the usual British murder-mystery types gather for a weekend retreat at the sumptuous country estate of the esteemed Lady Somerset. There’s the major who served in India; the inebriated, fading actor; the innocent ingenue; the exotic lady in red; the mysterious Chinese gentleman; the rich dowager aunt; and her faithful maid and worthless nephew. Suddenly one of them dies of poison! Well, of course. Oh, what fun! But wait...Her Ladyship refuses to summon the police! She says she won’t go through all of this again. All what again? And why were they all invited here in the first place? Is this actually just another formulaic, all-to-predictable mystery story? Or is something diabolically...different? Agatha Christie meets Pirandello, as characters rebel against their author. It’s bloody murder!

Spring 2019 - "Death and Taxes!"
Written by: Pat Cook. Directed by: John Santalla
Synopsis: Ever wonder what goes on at a small-town city council meeting? In Hendricks, they're looking for a murderer. Mayor Kathleen Lyles boldly announces that the meeting will be more like a coroner's jury than the usual round of arguments. Not only was a man murdered, but he was an employee of the IRS. "Somehow I don't feel that bad!" Carl Johansen says, as the sheriff clamps the cuffs on him, making him the prime suspect. Slowly it becomes apparent the entire city council had seen the man, and each of them seems to be hiding something. Who murdered the stranger? Was it Cora Sedgewick, who was still dizzy at the time from stepping on a rake and being thumped in the face with its handle? Or newspaper editor King, who's right on the spot to report the facts, if he could only find a pencil? Or maybe the mayor herself, who was doing her laundry in the back of city hall? Adding to the fun... the audience can see the scene of the crime and question the suspects!

Winter 2018
Audiences shared the holiday magic as Iron Mountain presented a special mix of holiday traditions, stories and songs, with a special handbell choir performance by the Harmony Bells!

Fall 2018 - "The Savannah Sipping Society!"
Written by: Jessie Jones, Nicholas Hope, Jamie Wooten. Directed by: Caroline Von Glahn
Synopsis: In this delightful, touching, and laugh-a-minute comedy, four unique Southern women, all needing to escape the sameness of their day-to-day routines, are  drawn together by Fate - and an impromptu happy hour - and decide it's high time to reclaim the enthusiasm for life they've lost through the years! Over the course of six months, filled with laughter, hilarious misadventures, and the occasional liquid refreshment, these middle-aged women successfully bond and find the confidence to jumpstart their new lives. Together, they discover lasting friendships and a renewed determination to live in the moment—and most importantly, realize it’s never too late to make new old friends.

Synopsis: In this charming and touching comedy, 5 southern women, whose friendship began years ago on their college swim team, set aside a long weekend every August to recharge those relationships. Free from husbands, kids and jobs, they meet at the same beach cottage on North Carolina’s Outer Banks to catch up, laugh and meddle in each other’s lives. The Dixie Swim Club focuses on 4 of those weekends and spans a period of 33 years.

Iron Mountain's second production at their new home base was the laugh out loud adult comedy: "Men are Dogs", written by Joe Simonelli and directed by John V. Santalla. The playwright made a special appearance at one of the performances and delighted the crowd with a question and answer session.

Synopsis: Cecelia is a successful psychologist who runs a support group for single and divorced women. She's got troubles of her own, but it's her ensemble of neurotic patients who provide the action when a "volunteer" role-player becomes the hapless victim of their not-inconsiderable ire.

Fall 2016 - "The Witch in 204"
​​​Iron Mountain Stage Company presented their first show at Weis in the Fall of 2016: “The Witch in 204”, ​a comedy written by Barbara Pease Weber. Barbara is a (somewhat local) Pennsylvania writer who Iron Mountain has come to know over the past several years, as they have performed three other of her comedies (Delval Divas, HOGWASH!, Seniors of the Sahara.)  The show was directed by Ringwood resident and Iron Mountain Trustee Jill McDonald, stage managed by Marijane Santalla, and performed by talented local amateur actors.​

Synopsis: Latch your windows! Bolt your door! Beware of The Witch in 204!  You know your property value has plummeted when a witch moves in next door! But that’s not retired schoolteacher Sylvie Goldberg’s only trouble. Sylvie’s hopes of living happily-ever-after with Eugene, the “otherworldly” gentleman of her dreams, soon dissipate when the witch next door, Bella, turns out to be Eugene’s mysterious former paramour, who proceeds to wreak havoc on Sylvie and Eugene’s wedding day as the uninvited guest.

We are proud to partner with Iron Mountain Stage Company, a non-profit performing arts company bringing community theater to our area continuously since 1993. They typically present two productions a year, with performances outside in our covered pavilion or in our main building. They are also a featured guest during our summer and school break camps, guiding children through sound and movement activities that help them build confidence and tap into their creativity. Iron Mountain also presents acting/improv workshops.

Next Date: TBD
Interested in exploring acting, or just looking for a fun evening out? Join Iron Mountain Stage Company for an improvisation/ acting workshop. In a supportive environment we will explore some basic improvisation, movement and acting exercises. No experience necessary; we welcome beginners! 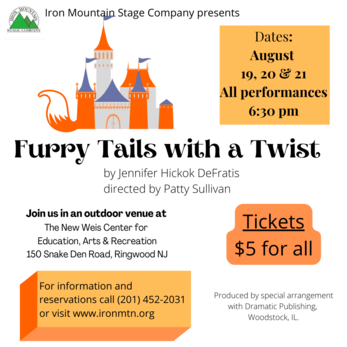